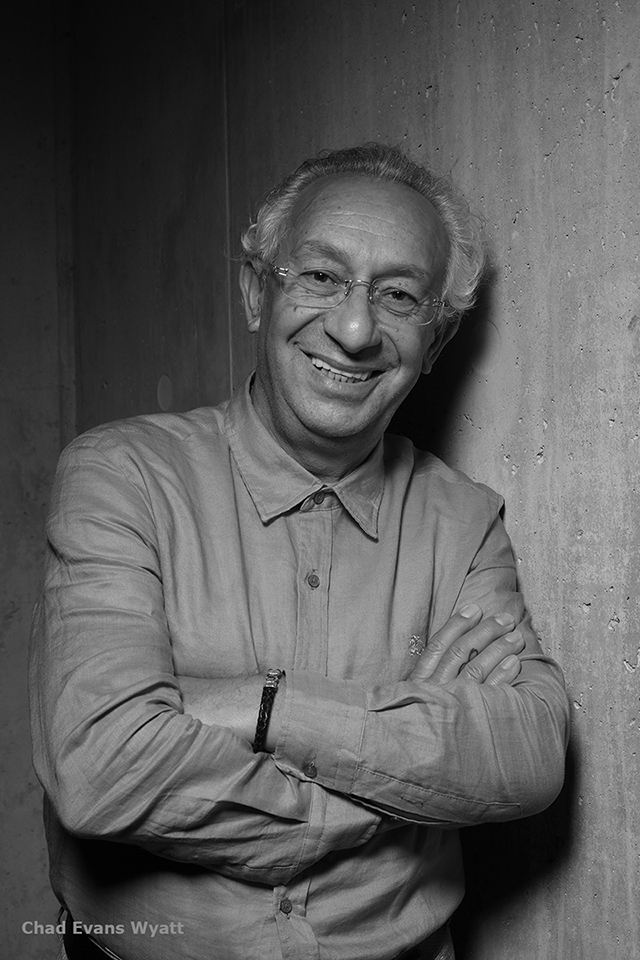 Orhan Galjus was born in Kosovo in 1955. His grandparents had eight children, four boys and four girls. Orhan was their first grandchild. The family lived in a big house "but there were a lot of us living there. When my grandfather died, he had more than fifty grandchildren."

"There are six of us in my own family. My late papa was a warm stone. He had a simple touch or look. Not a big talker. He would say 'if you find a better place to live please tell me.' My mama, now eighty-seven, has her own radio programme. She speaks from morning to night."

"Each of my own children is so Orhan. Each is so much a part of me. Each carries a name from our people's journey."

"My grandfather's influence was instrumental in making me who I am today. One day when I was about five my grandfather turned on the radio. I thought to myself 'how does this work? How can there be so many people in this box?' One morning I was alone in the house, so I opened the back of the radio. I thought I would see all kinds of people in there - but no. I accidentally tipped over the radio and it fell to the floor. My grandfather came to see where all the noise was coming from. 'How did the radio fall?' he asked. I explained what I had been trying to do. 'Do you want to become one of those people speaking on the radio?' Yes, I replied. 'Then you need to attend school,' he told me. With his encouragement and support, I have become one of the most famous journalists of Roma background in both the former Yugoslavia and in my native Kosovo. I have done thousands of hours of radio in the Romanes language."

"In former Yugoslavia I got a big scholarship. I had more money than my parents who had worked hard all their lives. They did not really understand how my work as an activist would form the crux of my being. I initially received a scholarship to study business administration, but this did not really interest me. I transferred to journalism and moved to study in Belgrade. This was in 1981, the beginning of the push for emancipation of the Roma in the former Yugoslavia. I helped establish the radio programme Ashunen Romalen on Radio Pristina. The live call in show actively called for freedom of speech and equal rights for Roma and was critical of the Soviet controlled government."

"I predicted the coming war in Yugoslavia. In Romanes – there is no single word for war. As a radio broadcaster, I had to use other languages to express the concept. In Romanes you are able to describe the action of fighting. For example, me marav tut means I am killing you or beating you up. It is a direct personal action."

In 1990, Orhan left Yugoslavia and moved to Holland. There he organized a Romanes language radio programme, Radio Patrin in Amsterdam. He also published the magazine Patrin. Patrin is often translated as 'leaf.' This is a literal translation. A more accurate rendering might be, 'code'. Patrin are the coded signals one Roma group would leave for the next. "For example, if a 'patrin' showing flames around a broken mirror were left as a marker that would be a warning that there was danger ahead."

"At this point, I have years of experience as a radio broadcaster in Romanes, but that is not enough. I want to reach Roma everywhere."

"My People, my proto family, left India about one thousand years ago."

Mahmud Ghaznavid was the first Sultan of a Persianate Dynasty in the early 11th century which invaded much of northern India and present-day Pakistan He employed Roma and they began to migrate with his forces toward the West. They crossed the Sind province, then into Pakistan, Afghanistan, and Persia. The Roma remained in Persia for two hundred years. The Romanes language was maintained and became a legacy, a tribute to the strength of the Roma people. "I have been to Persia several times. Harmony I learned, is when you confront many issues and make them one." The Roma moved into Turkey (Anatolia) for another two hundred years. They fought on the Ottoman side in the battle of Iznik in the 1300s.

"I have discovered that western Europe does not have a good ear to listen to my issues, my concerns as I became more and more active. How is it possible that the West does not grasp these necessities as well as the east does? Today I am working on initiatives in Minsk. In Moscow. I have worked with several organizations to build modern Romani institutions. We had held several conferences to rethink what our people need today. Most important is to get back to the truth."

"The next step must be to build alliances with democratic groups all over the world to build political power. We must have education to surmount our challenges worldwide. We must organize the 'beautiful minds of our people'."